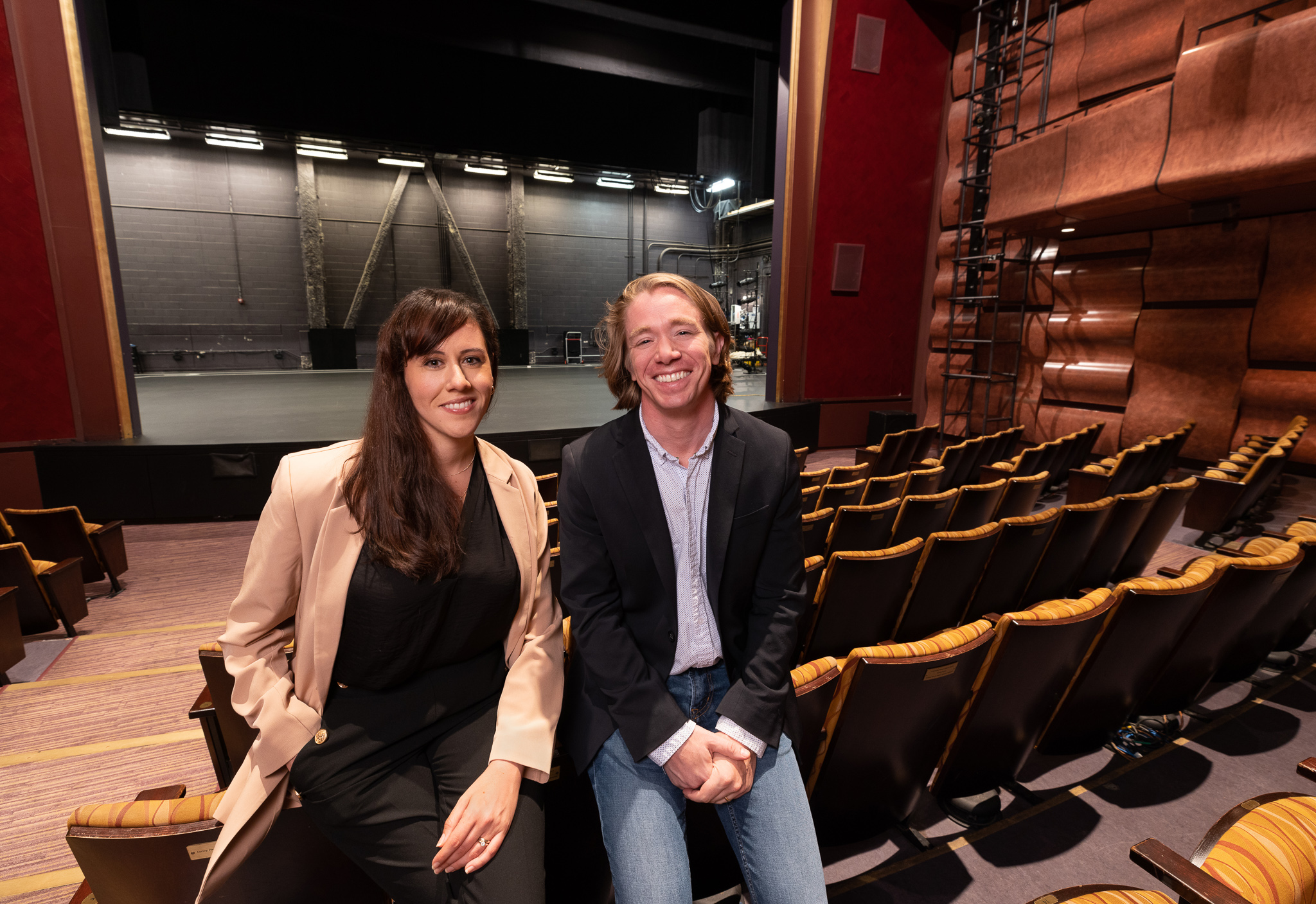 After a nation-wide search, the Board of Directors of Philadelphia Theatre Company (PTC) has found its new artistic leadership. The company is thrilled to welcome the nationally acclaimed husband-and-wife team of Taibi Magar and Tyler Dobrowsky as PTC’s new co-Artistic Directors. Following the five-year tenure of Paige Price, who stepped down to focus on commercial theatre producing, Magar and Dobrowsky will start their official duties this September.

Taibi Magar is an Egyptian-American director whose work has been seen across the US as well as internationally, and her many accolades include an Obie Award for Directing (2018, Is God Is by Aleshea Harris), the “Break Out Award” from the Stage Directors and Choreographers Union and her Lortel-winning revival of Anna Deveare Smith’s Twilight: Los Angeles, 1992 is set to open at the American Repertory Theater in Cambridge, MA, this fall.

Magar and Dobrowsky together possess a robust artistic skill set, a broad, deep network of actors, directors, and playwrights, and world class directing and producing abilities. They will partner with current Managing Director Emily Zeck to set the stage for PTC’s new chapter, which begins this fall with the World Premiere of The Tattooed Lady opening Friday, November 4, as PTC celebrates 15 years in the Suzanne Roberts Theatre.

“I am very excited about Taibi and Tyler joining PTC as Co-Artistic Directors,” said PTC Board Chair Gary Deutsch. “Taibi and Tyler are rising stars in the theatrical world, and their artistic leadership will energize PTC and the Philadelphia performing arts community. PTC is embracing a new leadership model that will take advantage of Taibi and Tyler’s complementary strengths. They share PTC’s commitment to equity, diversity, inclusion and accessibility and they will advance our goals of expanding PTC’s constituency and bringing entertaining and thought-provoking programs to the Suzanne Roberts Theatre.”

Zeck, who started with PTC five years ago, is looking forward to this new partnership. She is excited about their energy and what both of them bring to the table to move PTC into the future.

“Taibi and Tyler are a jolt of energy that will propel PTC into our next chapter,” said Zeck.  “They are so excited to learn and provide what Philadelphia wants and needs from PTC, and we are ready for it. Their commitment to make excellent art while also representing Philadelphia on and off the stage is their magic, and it’s more than the sum of their two individual talents. I can’t wait to see how PTC will contribute to – and even shift – the American theatrical canon under their artistic leadership.”

For the nationwide search, PTC utilized the services of ALJP Consulting. ALJP is a search firm that has set out to reimagine the arts and culture sector and places inclusion and equity at the heart of what they do.

“The candidate pool for this search was incredibly strong with vibrant artists,” said ALJP Principal Al Heartly. “Tyler and Taibi stood out to stakeholders as a pair that could bring innovative ideas with their leadership model to Philadelphia Theatre Company and the Philadelphia community as a whole. Leading and operating theaters, especially in light of the last few years, has only become more complex. The idea of having more voices in the room to make difficult choices always makes for better decision making.”

For the new Co-Artistic Directors, Magar and Dobrowsky were drawn to PTC for its commitment to high artistic quality, and its dedication to new work. They have both developed new plays throughout their careers, Magar as a director and Dobrowsky as a producer. In the fall of 2021 they co-directed Macbeth in Stride written by Obie-winner Whitney White at American Repertory Theater. They also worked together on the theatrical adaptation of Mike Stanton’s New York Times best-seller The Prince of Providence at Trinity Repertory Company, the highest grossing show in Trinity Rep’s history. Magar also has local connections to the Philadelphia community – she directed Lighting Rod Special’s international sensation Underground Railroad Game and was a Senior Lecturer at University of the Arts. Dobrowsky has a rich background in commissioning new works by writers such as George Brant, Jackie Sibblies Drury, James Ijames, Whitney White, and Lauren Yee, among others.

“It’s especially gratifying when a new play you’ve shepherded and produced goes on to have a rich, full life either in New York or across the country,” said Magar. “We can’t wait to work with the truly fantastic artists in Philadelphia and bring our network of collaborators to PTC in order to develop the best new plays in the country right here in Philly.”

Dobrowsky and Magar have a deep interest in community engagement and the educational side of theatre. “Community engagement and education are inextricably linked to who we are as people, and as artists,” said Dobrowsky. “It is a humbling, thrilling opportunity to make our artistic and creative home in such a vibrant city like Philly. We can’t wait to develop educational opportunities for the young people of this city, and to start building mutually beneficial, reciprocal relationships with community groups throughout Philadelphia and beyond.”

The pair looks forward to making their mark on the Philadelphia theatre landscape.

“Philadelphia should know that we will always put the highest quality theater on our stage,” said Magar. “And this high quality theater will be tied to our profound commitment to Equity, Diversity, Inclusion and Accessibility.”

“We believe a theater isn’t just a place to see great plays, but that it should also be an integral part of the social, cultural and civic fabric of the city,” said Dobrowsky. “We want PTC to be a public square, a place for communal gathering, reflection, and learning – a community center dedicated to art and culture that reflects this beautiful, diverse city. We want to emphasize the ‘Philadelphia’ in Philadelphia Theatre Company.”

PTC’s 48th anniversary season includes a major world premiere, a Philadelphia premiere, and a modern classic that all explore the idea of liberation and being freed from social norms, barriers and stereotypes. The 2022-23 Season gets off to an electrifying start with the world premiere of The Tattooed Lady, a new musical by co-librettists Erin Courtney and Max Vernon with music and lyrics by Max Vernon, developed with and directed by Ellie Heyman. This much-anticipated musical was first conceived as part of the Kimmel Center’s Theater Residency before being further developed and then commissioned by PTC. The story explores the lives and legacies of a century of tattooed ladies from the 1880s through the 1980s. It runs October 28 to November 20, 2022.

Next up, audiences will be introduced to the Philadelphia Premiere of Empathitrax by local writer and actress Ana Nogueira, who appeared on “The Vampire Diaries” and originated the role of Eliza in early workshops of Hamilton. This futuristic darkly funny sci-fi story about a young couple who turn to a breakthrough in pharmacology to save their struggling relationship runs February 10 to March 5, 2023. Noted Philadelphia director Nell Bang Jensen, who directed PTC’s digital production of The Wolves, returns to direct this hilarious futuristic story. The season will close with Lanie Robertson’s modern classic about one of Billie Holiday’s final performances in the City of Brotherly Love, Lady Day at Emerson’s Bar and Grill. Lady Day’s songs will be center stage April 7 to April 30, 2023. PTC Resident Artist Jeffrey L. Page, who will have just finished co-directing the Broadway revival of 1776,  is reminaging this incredible look at a final performance of a legend.